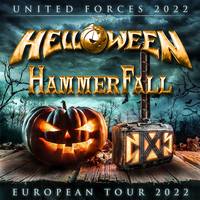 This is the new date for the HELLOWEEN show initially planned for the 28th of May 2021. Tickets remain valid for this new date. We thank you for your understanding and hope to see you soon at the Rockhal.  - What is worth waiting for: UNITED FORCES TOUR 2022 It was already foreseeable: Due to the pandemic, the originally for April/May scheduled HELLOWEEN European tour has to be postponed again. However, this is no reason to hang your head, even more so now: it is getting even more powerful in 2022! We all have to stick together to stand and endure this agonizing live music gap and because extraordinary circumstances require extraordinary measures, HELLOWEEN invited their friends from HAMMERFALL to join them on their European tour in order to create a tremendous metal-package together. The UNITED FORCES TOUR 2022 called alliance is not only the full HELLOWEEN experience, on top the fans will enjoy fine Swedish steel out of the HAMMERFALL forge. Both bands will have brand-new albums in their luggage and the European fans will be able to listen to the new songs live for the very first time on the UNITED FORCES TOUR 2022. The long–awaited end of the dry spell is in sight - coming with a double dose in March, April and May 2022 as we have to catch up two years of METALPARTY to get cured from a lot of withdrawal symptoms! Andi Deris: “We are `hammered ́ to have our friends from HAMMERFALL with us on tour! Back in 2002 the band produced their album “Crimson Thunder” in my studio in Tenerife and we had a lot of fun back then. This mega- package is delivering the appropriate metal- spectacle to enter the stage with full power! Oscar Dronjak can hardly wait: "We are so ridiculously excited about this! Not only do we get to go out on tour again after two looooooooong years of stage draught, but we get to do it with a band that we love and was a great inspiration to us in forming HAMMERFALL in the first place. The UNITED FORCES TOUR will be something truly special, you can count on that!“ For the dry run up front, HELLOWEEN is releasing their fantastic new album and with the unification of their three vocalists Kiske, Deris & Hansen the album reminiscences to all eras of the band’s history. This already is a sensation in itself, but also HAMMERFALL is ready to release a brand-new record before the tour starts. A great forerunner to get warmed up for the double load of live power with the ultimate UNITED FORCES TOUR 2022. And whoever misses the just announced dates was probably never infected by the metal virus ...