Rocklines. A journey through Minett, the sea of red rocks.

This summer, Italian author Davide Sapienza and Luxemburgish scientist Robert Weis have explored the UNESCO Biosphere from a new angle, approaching it through a geopoetical project. A conclusion of the journey by Robert Weis can be found here. 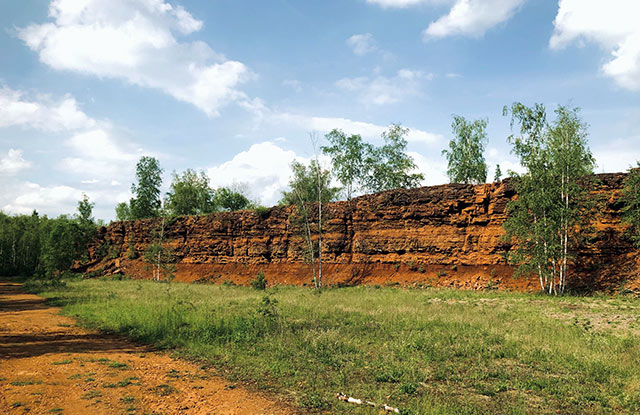 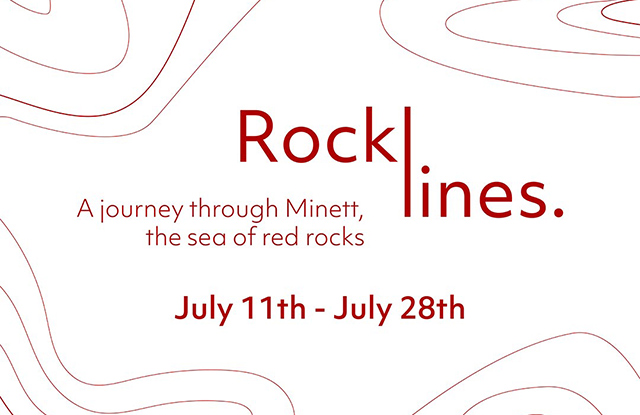 “What is geopoetics? The geopoetics project is not just another cultural “variety”, nor is it a literary school, nor is it poetry as an intimate art. It is a major movement that concerns the very foundations of man’s existence on earth (…). The links of geopoetics with geography are obvious, but they also exist with geology, biology, and with ecology (including the ecology of the spirit), which is well-developed. In fact, geopoetics offers a meeting ground and mutual stimulation, not only – and this is increasingly necessary – between poetry, thought and science, but between the most diverse disciplines (…) by asking the fundamental question: what about life on earth, what about the world?” Kenneth White.

A geopoetic narrative for the land of red rocks

Minett as we know it is the land of red rocks. Its geography is that of a country where red dominates, the colour of iron ore being omnipresent and permeating the landscape of this region of southern Luxembourg. In people’s imagination, Minett has always meant “mining activities” which have marked the national and international industrial “steel landscape” of the 20th century. But Minett, like all geographies, is inhabited by a spirit of place, the “Genius Loci” of the Latins, which has never disappeared.

From the Jurassic oceans to the moonscapes left by mining, Minett’s intimate geography seems to be largely unexplored. 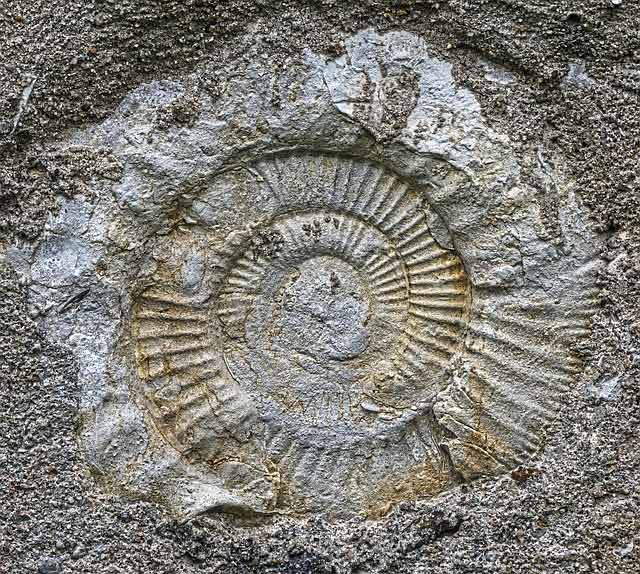 Geology is the hidden part of geography, but geography is the truest science of all: we look at a landscape, geography tells us everything in detail. It is our task to interpret it and then translate it into language, human action and practice. And the practice that European geography needs nowadays must be a creative practice: very little theory, a lot of practice.

180 million years ago, it all began in a not so deep sea, on the shores of a large island, in a delta exposed to tidal waves and a tropical climate.

Today, the remains of that Jurassic world have surfaced here, in the southernmost region of Luxembourg, on the edge of the Paris basin, on the border between Luxembourg and France. Iron turned into steel changed this landscape and the history of the people here in the heart of Europe. Today, these remains are the story of the landscape – the new ancient landscape that has inspired people to imagine their lives. How do we imagine our lives in this new landscape – geographical and human?

There is only one way to find out. We should start walking again, exploring as we have just landed on the new shores of this ancient basin: imagining, catching a glimpse of the poetic spark that springs from the void left by this industrial past, and starting to write a new book: Minett, Red Rock Country.

Biography of the authors

Working in the publishing world since 1984, his “first life” was devoted to music, translation of classical authors, journalism, radio and national television programmes. During these years he also worked extensively with Native American poets such as Lance Henson and John Trudell, who helped him shape a poetic vision related to Mother Earth. 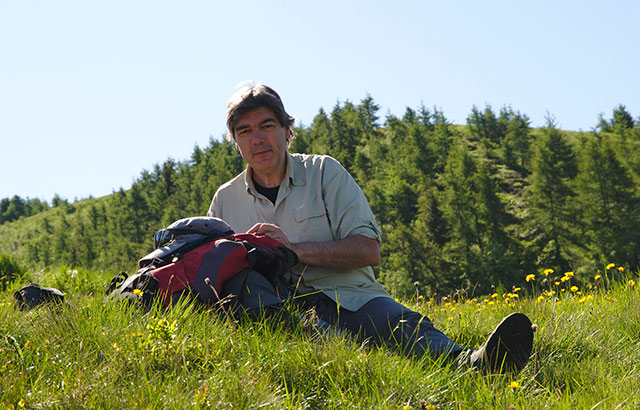 
From 1998 onwards, he devoted himself to travel and exploration and, of course, shaped his particular style. He then resurfaced in public in 2004 with his travelogue, the highly acclaimed I Diari di Rubha Hunish (which was the main event of the Bruce Chatwin Prize in the same year). This book, which has become an influential cult text for many new writers, began a literary cycle sealed in 2019 with Il Geopoeta. Avventure Nelle Terre Della Percezione.

In 2008, he co-wrote the groundbreaking and thought-provoking documentary on the First World War, with the director Enrico Verra, Scemi di Guerra (The Fools of War). In 2014, together with geographer, explorer and author Franco Michieli, he completed a three-year fieldwork for ERSAF (the Lombardy Regional Institute for Forests and Agriculture), a long walking study through the central Alps of Valcamonica, creating a 70 km long trail, after exploring more than 1,000 km of paths, ancient and lost roads, to connect the mountain farms of this region. The Via Dei Silter (the name of the path and the geopoetic guide), was voted as one of the best new paths in Italy and included in the book Cammina Italia (also distributed by IlSole24Ore) in 2020. Davide is working on the Bergamo edition of Corriere della Sera. He is currently working on a project for Bodo2024, European Capital of Culture.

Originally from the Minett region, Robert developed a passion for fossils and local rocks from a very young age. A former winner of the Young Scientists Competition, he has been working since 2002 at the National Museum of Natural History in Luxembourg as manager of the palaeontological collections and researcher specialising in Jurassic marine invertebrates. He is the author of about thirty scientific publications on the taxonomy and paleogeography of fossil cephalopods. More recently, the promotion and protection of the geological heritage has become one of his priorities. 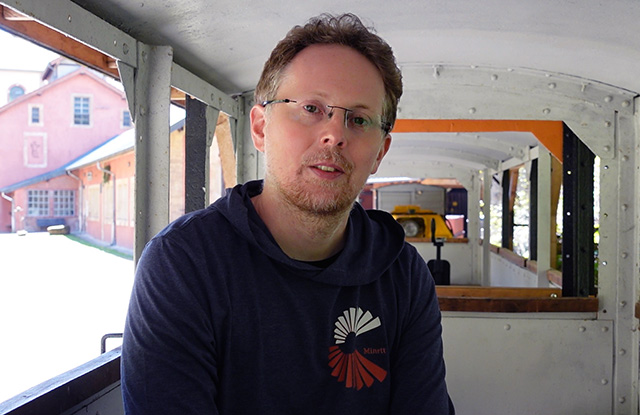 He regularly organises field trips to introduce the public to the landscape and to interpret the pages of the earth’s book. Besides his professional commitment, Robert Weis has always been attracted by different forms of artistic expression. With the association Panoplie he organised about fifty concerts in Luxembourg and the Greater Region between 2005 and 2010. He is also the founder of the independent label Pocket Heaven Records and for many years co-hosted the programme Sentier Sonori on Radio Ara.

Together with the Italian author Davide S. Sapienza, he organised and guided geopoetic and literary walks in the Mullerthal and Luxembourg City. His taste for travel and discovery led him to Japan on several occasions, trips whose notebooks are regularly published on the blog theroutetokyoto.com.


The Minett UNESCO Biosphere aims with this project to involve the inhabitants of the region in interdisciplinary experiences in order to involve everyone in the conservation of natural, industrial and cultural heritage. The project is part of the activation strategy of the Minett Trail, which is being realised and will be operational for Esch2022 – European Capital of Culture.

The authors will cross the Minett in a caravan that will stop at different places in the Minett UNESCO Biosphere for consultations with citizens, elected representatives, MUB partners and young people. The themes will be geography, geology and poetry. The caravan will include walks, aperitifs, visits to unusual places and a camp.

Following the July 2021 trip, material will be collected (texts, photographs, drawings, etc.) with the public and then compiled by Davide Sapienza and Robert Weis. A travel diary of the Minett will be published and put on sale in order to share the experiences of the two authors with the public.

Events open to the public

Throughout the project “Rocklines. A journey through Minett, the sea of red rocks there were a couple of events open to the public in order to get acquainted with the concept of geopoetics and to meet Davide Sapienza and Robert Weis offering their views and perspectives on Minett. 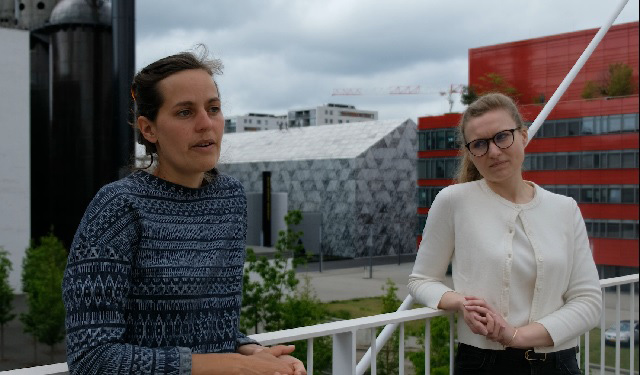 In this conference, Dr. Estelle Evrard (Spatial Justice and territorial governance) and Dr. Lise Landrin (Participatory Action Researchand Performative arts), researchers in Geography at the University of Luxembourg, explored the notion of emotional geography with their current project: REMIX PLACE “Pathways to participation: connecting diverse communities through place”. This interdisciplinary project is planned to star within the ESCH2022 program. It will explore people’s emotional and physical attachment to places.

Self-coined Geopoet, Davide Sapienza, has explained in the first part of the seminar his views on geopoetics by explaining how he explores his natural environment and how he allows his senses to guide his artistic authorial direction. In his talk he delved into the Geopoetic concept and what it has to offer in terms of the emotional connection people have with their intimate geography. 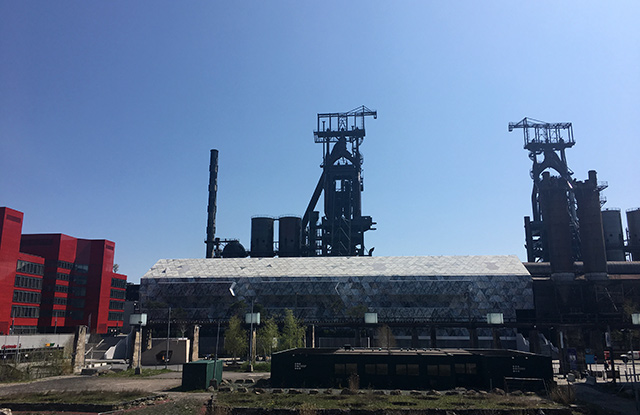 Davide Sapienza, accompanied by Thomas Cauvin (Public History Associate Professor, Luxembourg Centre for Contemporary and Digital History (C²DH)), lead, despite the awful weather conditions, a Geopoetic infused walk through the University of Luxembourg. Cauvin is developing a partnership with the Nuit de la Culture in Esch-sur-Alzette for participatory history projects, starting in 2022.

Pictures of the vagabondage.

The city administration of Schifflange invited to a geopoetic brunch in the nature reserve Lallengerbierg-Brucherbierg. The start was close to the athletics stadium. A geopoetic walk with Davide Sapienza and Robert Weis took the participants into the nature of one of the core areas of the Minett UNESCO Biosphere and has been followed by a brunch with local products.

Impressions of the geopoetic walk.

A geopoetic camp was organised from 23 to 25 July in Lasauvage. During these three days Davide Sapienza and Robert Weis introduced participants to the hidden natural and geographical treasures of the Fonds-de-Gras and the “Giele Botter” as well as the rich natural heritage of the valley of the “femme sauvage”. 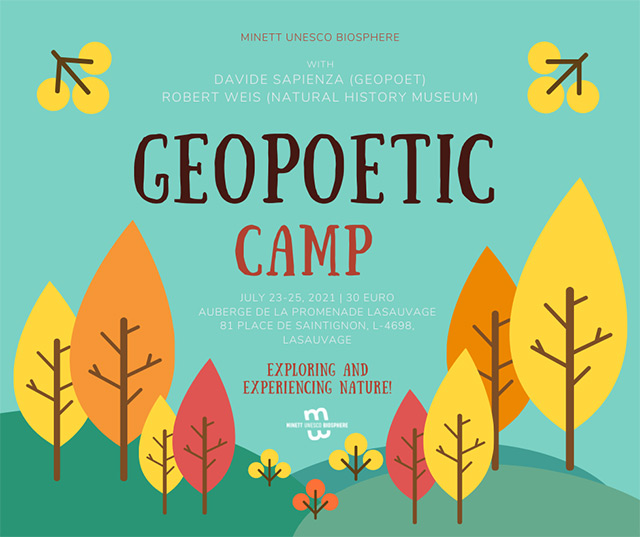 Find a recap of the camp here.

Starting at 19:30 Davide Sapienza and Robert Weis took a group of interested people through the nature reserve “Léiffrächen” in Kayl.

This geopoetic walk of about 90 minutes was followed by a discussion about the impressions gathered at sunset in the the amazing nature of the Minett UNESCO Biosphere.

Photos taken at the sunsetwalk can be found here.