The “Mmmh… Minett” project was officially presented today during a press conference, in the presence of the Minister of the Environment Joëlle Welfring. The aim of this project is to enable the traceability of food produced in the biosphere reserve. Thanks to this programme, these foods will be recognisable in order to be better identified by customers looking for local and seasonal products. The first product presented today is the “Minetter Schof”. For the past twenty years, the core and buffer zones of the Minett UNESCO Biosphere have been grazed by sheep. This pasturing prevents the areas from becoming overgrown and ensures the maintenance of the dry grasslands, biodiversity havens that characterise southern Luxembourg.

For the press conference, the inter-municipal association PRO-SUD, the Administration de la Nature (ANF) and the Ministry of the Environment, Climate and Sustainable Development had invited the press to the Lalléngerbierg. The Lalléngerbierg is one of the six core areas of the Minett UNESCO Biosphere. It is a former open-cast mine where iron ore was extracted from the surface. After its closure, large dry grasslands developed here, as in the other core areas of the biosphere reserve, and today constitute one of the most important biodiversity hotspots of the Grand Duchy. 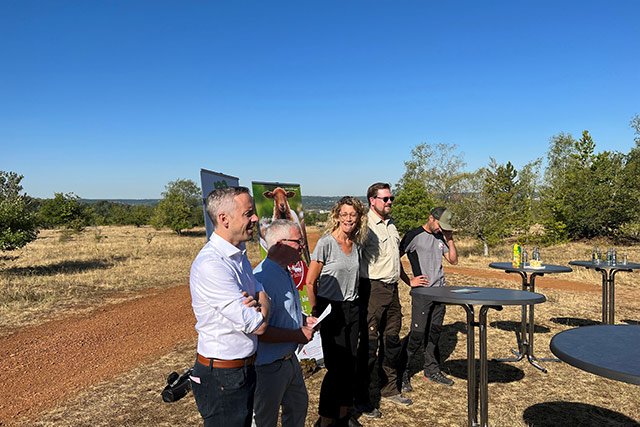 In her speech, Environment Minister Joëlle Welfring stressed the importance of halting the loss of biodiversity through concrete projects and of preserving the nature that surrounds us. In this sense, she praised the landscape management of the ANF, which is actively engaged in the preservation of the typical landscapes of the region. Laurent Schley, deputy director of the ANF, went back over the origins of the transhumance in the former open-cast mining sites, which was initiated some twenty years ago. At the time, the aim was to actively fight against the beginning of overgrowth of the areas and the appearance of primary forests, in order to preserve biodiversity and the landscape.

In his speech, the president of PRO-SUD, Georges Mischo, underlined the commitment of the young biosphere reserve to make the region’s products accessible to producers and customers and highlighted the regional role of the Minetter Schof, which enables a quality commercial product to be sold to the citizens of the region and the rest of the Grand Duchy. Farmer Pol Kail, owner of the flock that maintains the protected natural areas of the Minett, concluded the press conference by giving details of the red Ardennes sheep. The Ardennes sheep is a breed native to the Greater Region and was therefore deliberately chosen to cross the biosphere reserve. Another argument in favour of this breed some twenty years ago was its preservation, as the world population of the red Ardennes sheep has been steadily decreasing over the past few decades, to the benefit of other sheep breeds. 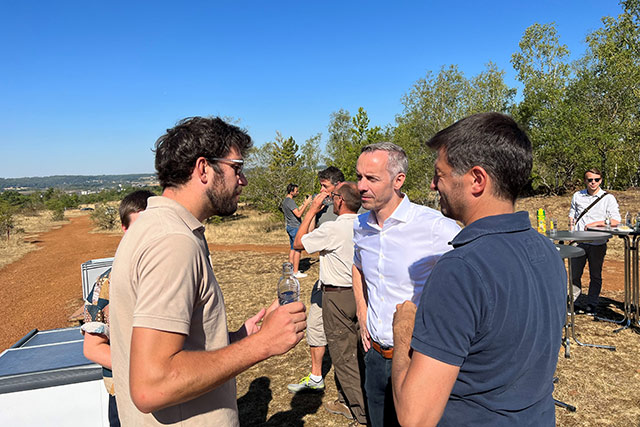 The meat of the Minetter Schof is processed by “La Provençale” and is now available in some supermarkets and butchers in the Grand Duchy. It is a regional product which will be available in the future every year between July and December.

For more details on the transhumance project, on “Mmmh… Minett” and other actions to promote local food production in the Minett UNESCO Biosphere, click here.